Best Vayne Skins in League of Legends (All Ranked) – FandomSpot

I’m not Gosu, but I can still appreciate the insane hyper-carry known as Vayne.

Shredding tanks like it is nobody’s business, going in and out of stealth, and nailing people to a wall just as a bolt pierces their heart. What’s there not to love.

And while her mechanics are pretty top tier, you might want to spruce up her looks a little, as her base model isn’t exactly the greatest. But how do you know which one to get?

Hopefully that’s a question we can help with as we rank all of Vayne’s skins released so far. 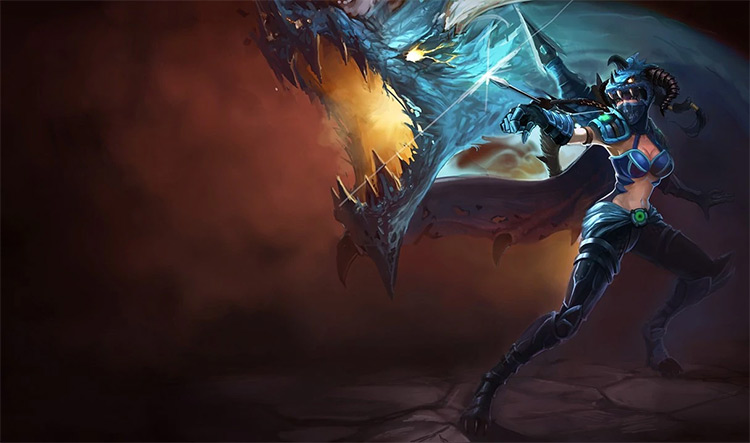 When you hear the word “dragonslayer”, you expect some Skyrim tier badassery.

On the one hand, you have skins like Dragonslayer Pantheon that completely deliver on this concept and make you feel truly powerful.

While on the other hand you get Dragonslayer Vayne.

She does not look like she slays dragons, but rather like a chick who just stumbled upon a dead dragon and decided that she wants to wear its face.

It just doesn’t make much sense.

Plus it’s rocking a 975 RP price tag, and only offering a silly character model change and no animation changes whatsoever.

I would definitely not recommend this one. 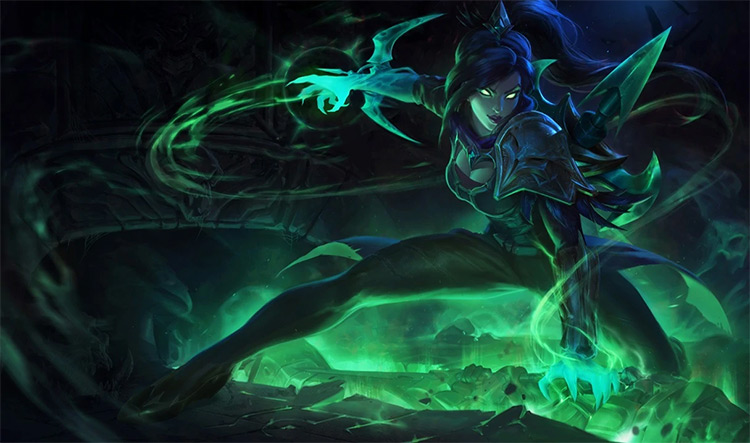 I had such high hopes for this skin.

Now I’m not going to sit here and tell you that the skin is ugly, because it’s not.

What it is, is somewhat mediocre, especially considering the price.

It’s one of the most expensive skins in the game – and yet all we get is a green coat of paint.

There aren’t even new voice lines for god’s sake!

If the skin was priced at 750 or 975 RP, it would have gone up several places on this list. But I just can’t recommend such an expensive and yet mediocre skin to anyone. 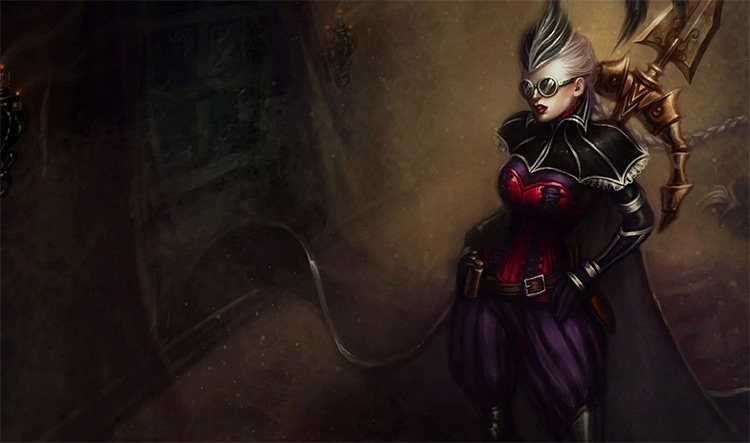 I like where this skin was aiming for, but I think Riot slightly missed the mark.

A Hellsing-like skin would fit in perfectly with Vayne. But Aristocrat Vayne just looks a bit stupid.

Her hair looks like a peacock feather, and her glasses seem too small for her eyes.

I can’t say that the skin is absolutely terrible, and considering that it’s so cheap, my expectations weren’t too high.

But I’m just not very jazzed about it.

If it got a few small tweaks, I’m sure it could be great. But for now it’ll remain right here in the ranking. 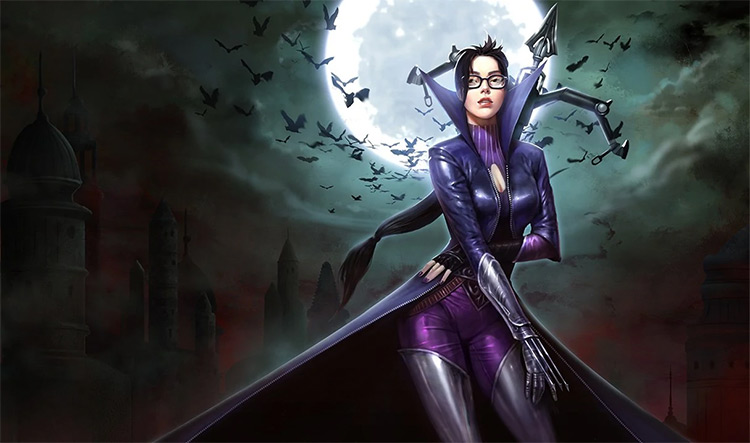 This skin just suffered a lot from time, as by modern standards it looks more like a chroma than a fully-fledged skin.

The color scheme definitely works well on the character model, and the updated splash art is pretty gorgeous.

But there isn’t much to say aside from that.

Again, it’s a very cheap skin. So I can’t hate on it too much.

But it’s only really worth it if you just want a simple color swap for the base model and not a unique theme. 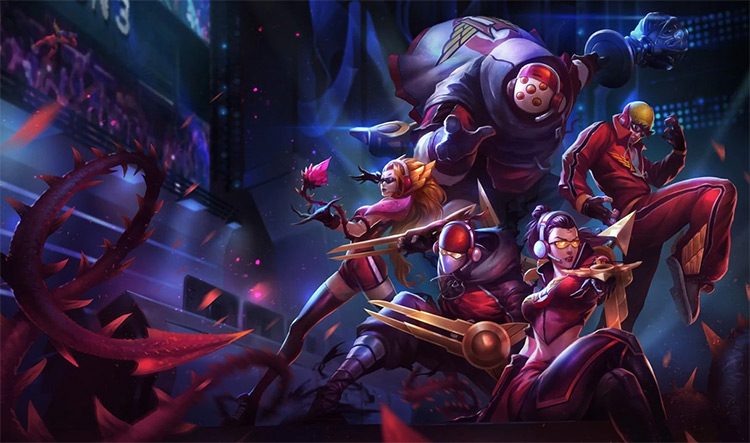 Visually, this skin is just alright.

It features a simple color swap with Vayne wearing red clothes and sporting a golden bow.

It looks really nice, and I honestly can’t really nit-pick any singular design choice that I don’t agree with.

It also came to be after the 2013 World Championship, so if you’re really into the professional scene, it’s bound to become a priced possession of yours.

Sounds like a pretty good deal if you ask me (but probably nothing ground-breaking).

Although this is not my favorite skin from the Heatseeker line-up, I think it’s pretty decent.

The in-game character model looks appropriate, with lots of reds and whites to match the theme. And her bow features a giant heart arrow, allowing you to kill people with kindness.

There are some new animations, but they mostly boil down to adding heart particles.

The ult animation is pretty sick, however.

It really gets you into that Valentine Massacre mood. 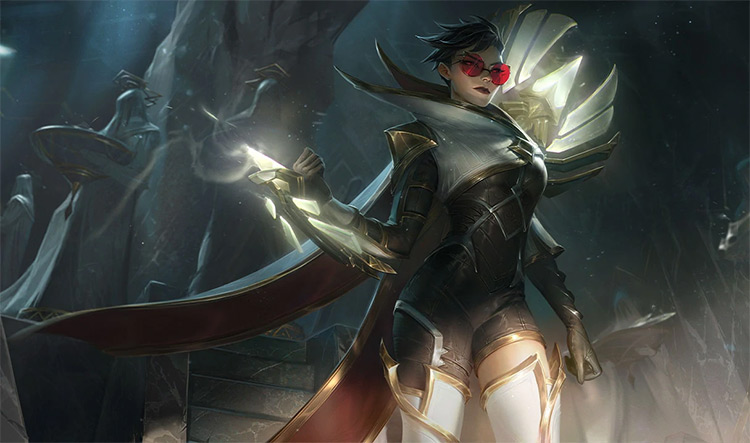 If I looked at this a vacuum, I would have absolutely loved this skin.

The character model is masterfully crafted, and the skin features some amazing new animations.

The Q animation is clean as all hell, and both her W marker and E fit the part really well.

I found her ult to be slightly underwhelming, but not by much. I also love the fact that her emote has her pulling out her original base skin outfit.

However, this skin covers a theme that we’ve already seen (in an upcoming pick). I do think it does the theme more justice, but not by much.

And considering that it’s one of Vayne’s most expensive skins, that’s going to cost it a few ranks on this list. 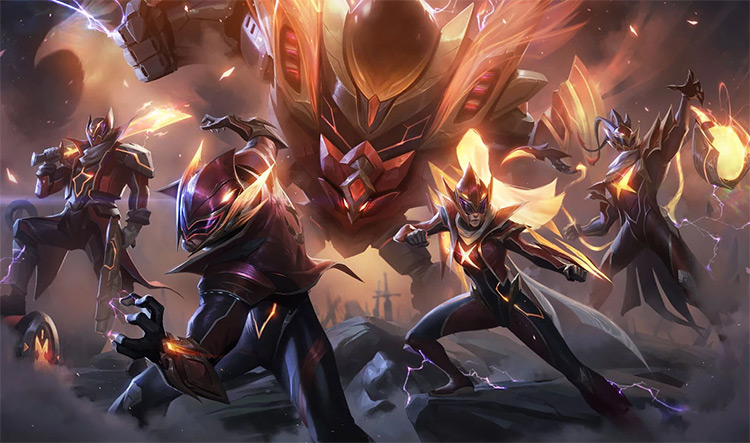 As a World’s skin, this one does a lot better job than SKT.

Although it has the same emotes as the base skin, it features an absolutely funky recall animation -and some really slick ability animations.

Everything is given a fiery thematic, most evident with her W, and even the base skin is made to look a lot more modern and fierce.

I could see how the bright reds and yellows might not be appealing to some people. But I personally liked it quite a bit.

Plus it’s like having a piece of history, being that it came from the Championship and all. 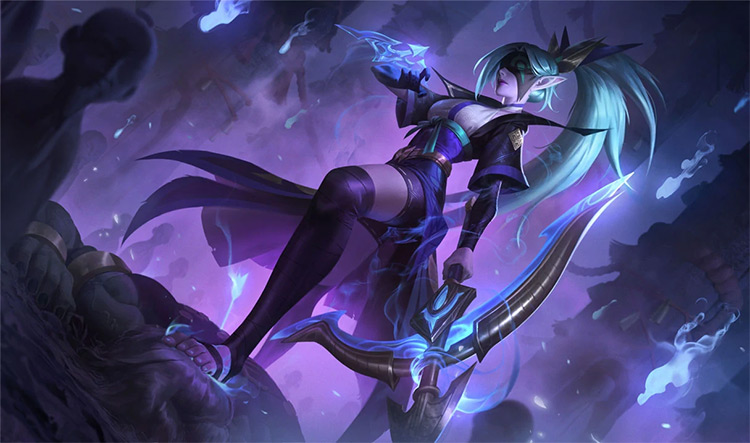 The following skins are all pretty interchangeable in my mind, as they all bring something new to the table and do it justice.

Spirit Blossom Vayne has an amazing thematic, with lots of light and dark blues, as well as a slightly demonic theme.

All of the animations fit really well, with the ult being the jewel of the crown.

Ulting just makes you feel like a demonic hunter going in for the kill – and even features a hair color change, which you don’t see too often.

The only nitpick I have with the skin is that the “heels” Vayne is sporting look pretty clunky.

But I guess you can’t dominate WikiFeet and be practical at the same time. 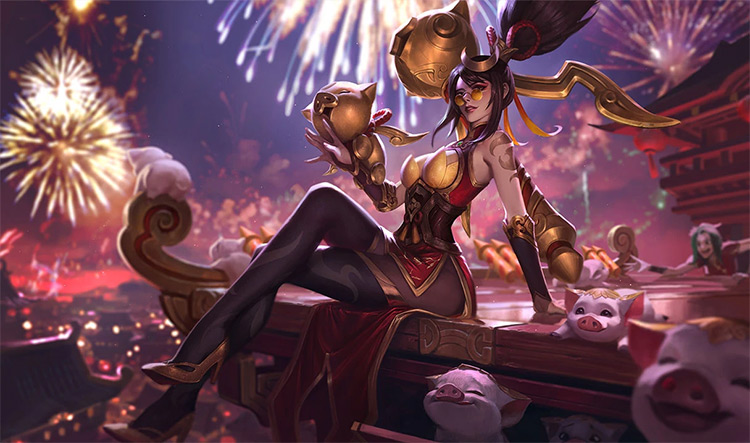 This skin is just clean as hell.

Much like all the other skins in the Firecracker franchise, Firecracker Vayne is very festive, with lots of reds and yellows both on the character model and within the animations.

The standouts for me are definitely her bow, which just reminds me of the dwarven aesthetic from Skyrim, and a little quality of life animation added to her new.

Now when you stun a target, a very clear firework will go off, which is far easier to spot than the usual animation.

Plus they somehow made Vayne thicker, which no one will complain about. 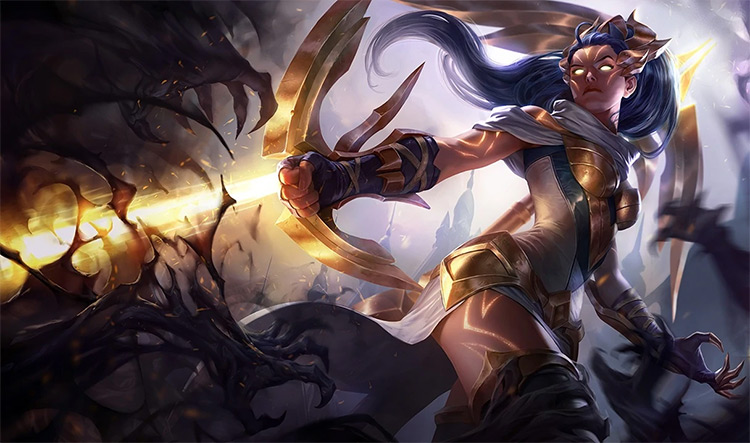 I have nothing bad to say about this skin. It feels like a classic to me personally, and could have easily passed as the new base skin.

It’s nothing over the top, and yet manages to take to champion in a slightly different direction.

The white-yellow color scheme works really well. And none of the animations are in your face and jarring.

As I said before, Sentinel Vayne definitely pushes this theme a bit further and features a bit more polish.

But considering this skin is only 975 RP, I think it’s too good to pass up. 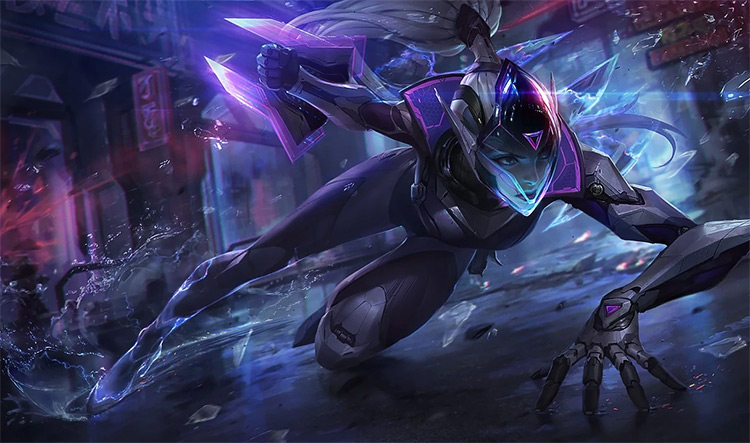 I really thought I would dislike this skin, I really did.

But it is hands-down the best one.

It just features so many good things that it makes the price tag completely reasonable.

There are completely new voice lines here, all made in that signature PROJECT robotic voice, as well as completely unique animations.

You can literally spin on your hands like a breakdancing star if you want to!

The W now also has a very neat little indicator that shows when the enemy is at two stacks, which is completely unique.

But most importantly of all, you can ride a motorcycle.

Don’t lie to me on this one. We’re all children at heart, and seeing Vayne riding around on a Homeguard motorcycle makes us happy.